At Green Ridge Restorations, we have a large stock of antique and vintage candy scales to restore. We used that as inspiration for this post, where we’ll take a walk down the sugary-delicious memory lane to explore the history of American’s love affair with candy.

The most common scales we restore are by Toledo and Dayton. Back in the day, these were used in grocery stores and candy shops for weighing small purchases. Today, these make excellent conversation pieces in retro-themed shops eateries as well as statement pieces in kitchens. 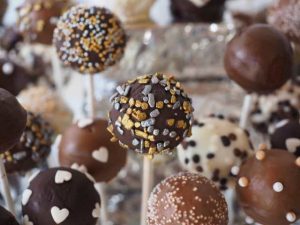 With the Industrial Revolution in full swing, America saw major growth and the introduction of many of the candies we know and love even today.

Those yummy little Halloween morsels we know and love – candy corn – were introduced circa 1880 by Wunderle Candy Company.

William Wrigley, Jr. brought us – you guessed it – Juicy Fruit Wrigley’s Gum in 1893.

And did you know how Tootsie Rolls got their cute moniker? From the daughter of Leo Hirshfield, nicknamed “Tootsie.”

Back in 1893, the now-infamous Milton Hershey has chocolate manufacturing equipment shipped from Germany to his PA factory.

You can thank Richard Cadbury for the all-American tradition of chocolates for Valentine’s Day. In 1868, he made the first V-Day box of chocolates.

Remember Milton Hershey? By around 1900, he rolled out an early variation of what we now know as the Hershey’s Milk Chocolate Bar. 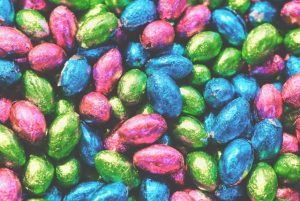 Oh, and those too-cute chocolate candy kisses everyone loves? By 1906, candy lovers were unwrapping silver foil to reveal Silvertops – which would later be known as Hershey’s Milk Chocolate Kisses.

1911 was a big year for Ethel and Frank Mars, who opened their company in Washington. Mars, Inc. would go on to become one of the most successful candy companies around.

Ever wonder when Life Savers got their name? In 1912, the name was coined since they resembled little life preservers. The first flavor was peppermint.

A year later, in 1923, Milky Way Candy Bars were released.

The beloved Snickers Bar came out around 1930 and got its name from the Mars family horse.

Candy connoisseurs may remember Valomilk Dips, which were born thanks to a “lucky accident involving marshmallow” at the then-Sifer’s Candy Company.

Bazooka Bubble Gum started delighting kids and adults alike from 1947 all the way to 2012.

1949 was a whopper of a year – that’s when the delectable choco covered malted milk ball Giants officially became “Whoppers.” 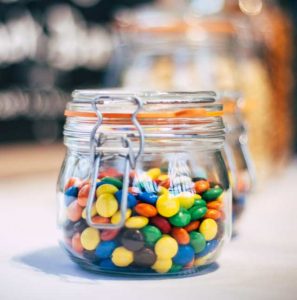 Who doesn’t remember candy necklaces? Those came out in 1958 and continue to be a classic candy fav.

By 1960, Starburst Fruit Chews were introduced by M&M Mars.

Ever wonder when Hershey started selling their legendary Kisses in colored foil wrappers? 1962.

Are you old enough to remember the original Razzles? Those sweet delights with the famous “First it’s a candy, then it’s a gum!” tagline hit the candy scene in 1966.

The 1970s were a big decade for candy, beginning right in 1970, when production on Reese’s Peanut Butter Cups was doubled to keep up with demand.

Hershey would become the first candy company to provide nutritional information on its candy wrappers in 1973.

Building on the success of Reese Peanut Butter Cups, Reese’s Pieces were rolled out in 1978. 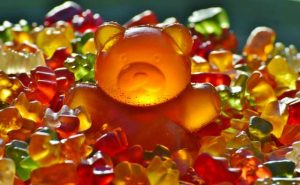 The decade went out with a crunch, when in 1979, the Twix Bar was introduced.

M&Ms went on a ride to outer space courtesy of Nasa in 1981 in the Space Shuttle Columbia.

Before Herman Goelitz Co. offered up USA-made gummi bears and worms, they’d been imported to Europe up till that point.

1989 was a year of decadent goodness, when Hershey offered up the Symphony Bar that was filled with crunchy almonds, toffee, and creamy milk chocolate.

Dove Dark and Dove Milk Chocolate Bars came out back in 1992.

Dulce de Leche Caramel M&Ms were introduced in 2002, but they didn’t last long before being discontinued. 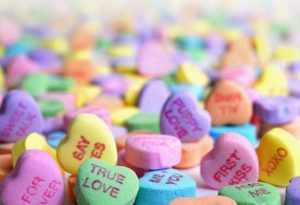 Intended as a limited edition candy, Hershey’s Kisses Special Dark have been delighting candy lovers since 2003.

Reese’s Crispy Crunchy Bar, with all its crunchy-chocolaty goodness, was released in 2006.

2010 saw the introduction of Hershey’s Take 5, and this chocolaty temptation also had a hint of saltiness, too.

So, now that you know more about America’s love affair with candy, get on out there and grab a bite of your favorite treat!