With summer in full swing, what a perfect time to talk all about…grass. On golf courses and in parks, outside office buildings and college campuses, dotting suburbia and glistening with morning dew along a rolling countryside hill…growing wildly or neatly clipped…the green stuff is pretty hard to escape in most parts of the US.

Commercials promise products that will banish pests from your lawn and keep it lush and green all season long. Each spring and summer, practically every big box retailer like Lowes and Home Depot has sales on grass seed and fertilizer and everything in between.

In recent years, organic products have offered a more eco-friendly alternative to lawn care. There’s even The Lawn Institute, “created in 1955 to assist in and encourage the improvement of lawns and sports turf through research and education.” 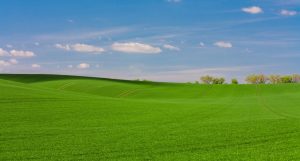 How did we come to love our lawns this much?

According to the Wikipedia, the term lawn “dates to no earlier than the 16th century.” Actually, “lawn” is not the same as “grass.” In general, a lawn is comprised of grass (or mostly grass), it is mown, and is for the benefit of people.

Some evidence even suggests that as early as the 12th century turfgrass lawns were in existence. Later on, in France and Britain, trees were removed from the grasslands that surrounded medieval castles, giving guards a better sight of visitors or potential threats.

Here’s a fun fact, courtesy of Planet Natural Research Center: Affluent landowners in 16th century France and England planted chamomile or thyme (instead of traditional grass) to create their lawns. Even today, these make a great alternative to standard grass.
Until the invention of more efficient equipment, property owners relied on livestock and scythes to keep lawns neat and trim. 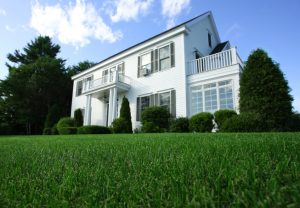 Moving on to Greener Pastures

The landscape of lawn care would be forever changed with the invention of the first lawnmower by Edwin Budding in 1830. By the 1850s, the chain-driven Silens Messor (meaning silent cutter) was introduced, somewhat more costly but lighter and quieter than previous gear-driven machines.

Fast forward to 1938 and well-known manufacturer Toro came out with a power mower for homeowners. March 1955 would see the introduction of the first zero-turn, ride-on mower. In 1963, John Deere came out with the 110, which would become a successful seller.

By 2008, the EPA rolled out stringent new rules intended to cut emissions and improve the environment. A Consumer Reports article from that time explained, “The new regulations take effect in 2011 for tractors and other riding models and in 2012 for mowers. Eighty percent of Class I (walk-behind mowers) and nearly 70 percent of Class II (riding mowers) engine families from the leading manufacturers would have to be redesigned to be compliant.” 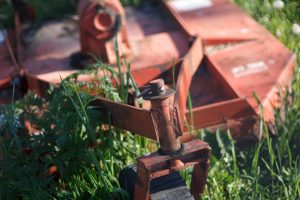 At Green Ridge Restorations, the customers who buy our restored John Deere tractors come from all walks of life. But they have at least two things in common: They love their John Deere’s – and they’re pretty devoted to keeping their lawn manicured perfectly.

Judging by this brief overview on the history of lawns and lawn mowers, we’ve surely come a long way from the days of relying on animals, scythes and sickles to keep our grass trimmed.