Learn more about the most common lawn & garden tractors we restore, including a brief introduction to the series as well as a few quick stats on each model: 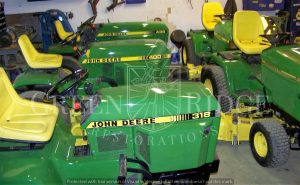 In the 1983 model year, the introduction of the “new” 318 marked the beginning of the revolution of John Deere’s popular 300 series of lawn and garden tractors.

In 1978, John Deere produced an earlier, Kohler powered 316 during that year only. The later series 316 and the model produced in 1978 share few similarities, however. The 316 is sometimes known as the “little brother” to the 318. Learn more about the John Deere 316 here. 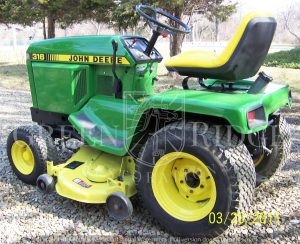 The infamous John Deere 318 is often thought to have revolutionized the garden tractor market and remains popular today, over 20 years after the last model rolled off the assembly line. The 316’s “big brother,” the 318’s design featured power steering and greater attention to user comfort. Read more about the John Deere 318 here.

The 322 was introduced in 1988 by John Deere along with the 332, its diesel counterpart. It featured a liquid-cooled, 3-cylinder Yanmar engine instead of the Onan twin-cylinder engine featured on the 318. Here is some additional detail on the John Deere 322.

The first 300 Series diesel tractor, the 330 was produced for only one year before being replaced by the 332 a short time later. This post delves deeper into the John Deere 330. 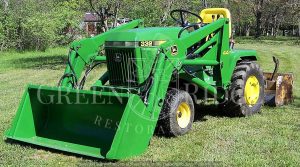 The John Deere 332 garden tractor featured a liquid-cooled 3-cylinder diesel engine and was nicknamed the “diesel 318”, given its similarities to the 318. The 332 replaced the earlier 330 and boasted additional features like power steering and dual hydraulics. Read more here…

The impressive John Deere 400 was more than 250 pounds heavier than the 140, with a wheelbase that was 6” longer! A variety of attachments, including loaders and rear backhoes, rear post hole diggers, and a rotary tiller (to name a few) were available. 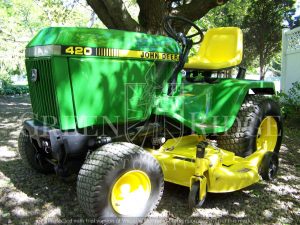 The 420 successfully replaced the 400 garden tractor in 1983 and featured a 2-cylinder Onan air-cooled engine and hydrostatic power steering. Here’s a fun fact: the 420 represented the first use of annunciator lights that were built into the dash panel. Want to learn more about the John Deere 420? Click here.

Introduced in 1984, the 430 garden tractor was John Deere’s first that brought together a diesel engine with hydrostatic drive and power steering. Did you know? Many people believe the 420 and 430 to be some of the best – if not the best – garden tractors ever built, because of their impressive lineup of features, along with their endurance and ease of use. More information about the John Deere 430 can be found here.

In the early 1990s, John Deere rolled out some fresh models – the 425, 445, and 455 – that replaced the earlier 400 Series lawn and garden tractors. To read more about these later models, you can view our blog post right here. 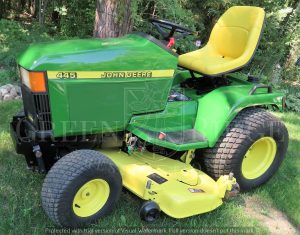 The John Deere 455 offered a 3-cylinder Yanmar diesel engine, hydrostatic transmission, power steering, and independent rear PTO. The 455 featured many optional attachments, including the model 40 front-end loader, which could be used exclusively on tractors with two-wheel steering.

For more comprehensive insight into these and other John Deere tractor models, visit:

Or, check out our in-depth posts on popular John Deere lawn and garden tractor models by clicking here.