“Nostalgia: A device that removes the ruts and potholes from memory lane.” -Doug Larson

Restoring old gas pumps here at Green Ridge is one of our favorite projects. Since we recently took in a few old pumps, we thought we’d use them as inspiration for a post on the history of gas pumps and service stations across America. 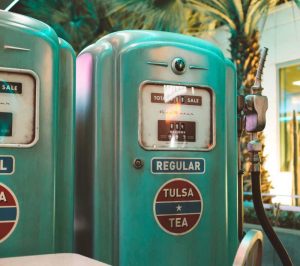 The year was 1885. S.F. Bowser had just sold his invention – a kerosene pump with marble valves and a wooden plunger – to a Fort Wayne, IN grocery store. According to the American Oil & Gas Historical Society, not even 20 years after that in Pittsburg, PA, the first purposely built drive-in gas service station would open for business.

In 1913, Gulf Refining Co. introduced a filling station in Pittsburgh that featured a pagoda-style facility with free air, water, and tire/tube installation. How’s that for service?!

Around 1915, some gas pumps towered 10+ feet tall. “Beyond being a measurement device, these pumps demonstrated the clarity of the gasoline; at the time, customers became increasingly aware that pollutants in gasoline would harm their engine,” explains the Automobile Driving Museum (ADM). 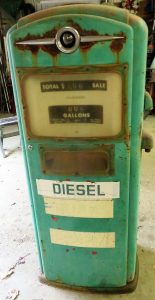 Designs of gas pumps in the 1920s boasted bold color and elaborate designs. Globes atop early gas pump were what lighthouses once were to ships travelling in the night – a light for weary travelers along their journey. Not only that, globes served as advertising for gasoline manufacturers of the day. Interestingly, globes were “the last decorative element of the gasoline pump to remain through the 1940s,” says the ADM. At the close of the 20s, there were about 200,000 gas stations dotting the US.

The 1930s through around 1940 saw art deco styled pumps, some of which featured a clockface and glass cylinders. Beginning about 1940-the early 50s, gas pumps had a more square design and still featured a top globe. 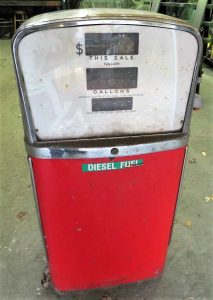 One of the pumps we recently acquired is a Bennett 966, manufactured around 1954-1956. It illustrates the more “square” styling of the era versus the earlier deco styled pumps. Another gas pump we acquired in the same lot is the Erie Model 743, believed to be manufactured in 1954. This is another good example of the square design of the 50s.

By the 1960s, pumps became more plain and boxy in their design, and at least in our opinion, they’re not nearly as appealing as the 1930s gas pumps with prominent art deco styling. According to an article in Collectors Weekly, early gas pumps with the cylinder on top and featuring an old clock face are some of the most collectible, as are computing pumps from the 1930’s through the ‘50s. 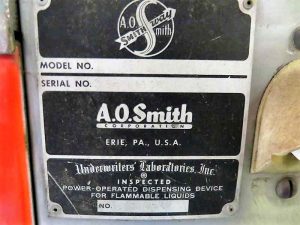 An Interesting Problem for Old Pumps

Here’s a fun fact for you: A 2008 NBC News article focused on the soaring gas prices at that time explained how old-school gas pumps had an interesting problem: thousands couldn’t register more than $3.99 on their mechanical dials!

Moreover, many also weren’t able to exceed $99.99 in a single sale total. Back then, NBC stated that there were about 8,500 service stations in the US that had old-style meters, or about 17,000 individual pumps.

A Thing of the Past 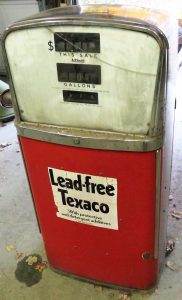 The article also quotes a spokesman for the National Association of Convenience Stores as saying, “If you’re just that kind of image of the ‘50s gas station where you have a conversation, fill up and have a cup of coffee, that’s in the movies.”

Today, some people purchase replicas of original gas pumps, while others collect restored and un-restored originals. Mom and pop service stations might be a thing of the past, but collectors across the US and beyond are keeping the rich history and nostalgia of America’s early filling stations alive even today.