This is a robust, heavy duty tractor and one of the most popular John Deere lawn tractor restorations we do. Some original 430 owners have told us they paid upwards of $9,000 way back in the early 1990s!

Here’s a quick summary of stats for the 430:

Looking for John Deere 430 parts? We recommend JDParts, which is an easy way to find what you need. You can also reach out to your local John Deere dealer.

Join us as we travel back more than three decades to 1984, when the first 430 John Deere tractor was rolled out. If you’re old enough, see if you can remember any of these highlights from 1984… 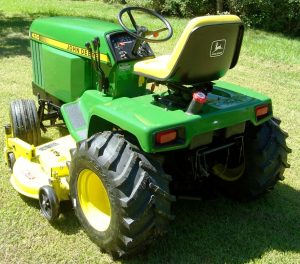 While filming a Pepsi commercial in January ’84, Michael Jackson’s hair went up in flames. The following month, however, Jackson would go on to take home a record eight Grammy’s.

When nude photos surfaced in Penthouse magazine, former Miss America Vanessa Williams gave up her crown. Following the controversy, Williams bounced back in the late 1980s with the release of “Dreamin” which hit #8 on the Billboard Hot 100 chart in the US.

Some weird weather events included a May 27th flash flood that poured 15” of rain on some areas in Tulsa, OK in just four hours. Fourteen people lost their lives during that event. A few weeks later, on June 8th, an F5 tornado ravages Barneveld, WI, claiming the lives of nine people, injuring scores more, and causing millions in property damage.

Astronaut Kathryn D. Sullivan made history on October 11th, when she became the first American woman to perform a space walk. On October 5th, Marc Garneau became the first Canadian in space, aboard the Challenger.

1984 was a presidential election year, which saw Ronald Reagan beat Walter F. Mondale. Reagan had 59% of the popular vote – the most since Richard Nixon boasted a 61% victory in 1972.

At the movie theater, Beverly Hills Cop, Ghostbusters, Gremlins, and The Karate Kid were entertaining audiences everywhere. Indiana Jones and the Temple of Doom was the third highest-grossing film that year. Building on America’s dance craze, audiences were tapping their feet to Footloose. And Daryl Hannah sent hearts racing as the beautiful, mysterious mermaid in Splash.

Prince released “When Doves Cry” and Tina Turner wondered “What’s Love Got to Do with It.” Paul McCartney and Michael Jackson’s hit “Say Say Say” hit #3 on the Billobard Top hot 100 songs of 1984, followed by “Footloose” by Kenny Loggins and “Against All Odds (Take a Look at Me Now)” from Phil Collins. Rock fans were pumped for Van Halen’s “Jump” and Ray Parker, Jr. released his infectious tune “Ghostbusters.”