From 1993-2001, John Deere produced a new series of lawn and garden tractors: the 425, 445, and 455. While these are all solid tractors that enjoyed a long, successful sales run, they’re not nearly as well-remembered as some of John Deere’s more popular earlier models like the 318.

One of the key advantages to these later tractors is that they have a foot controlled hydrostatic transmission versus the earlier series such as the 318 that had a hand control on the dash. Many people appreciate the more “modern” conveniences offered on these tractors.

From a body perspective, John Deere got away from using as much metal on these later series versus the earlier models. Some body panels were actually plastic versus metal, so they don’t feel quite as heavy duty as previous models. 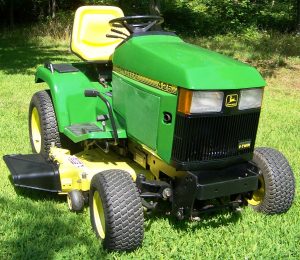 Mower deck size options included 48”, 54”, and 60” widths, all 3-blade with hydraulic lift. Plenty of useful attachments were offered, including a 54” front mounted blade, 46” single-stage snow blower or 47” dual-stage blower, and a Model 40 loader.

Here’s a link covering the 425 and 445 on Deere.com that you may find useful.

Production on the successful John Deere 425 ended in 2001. 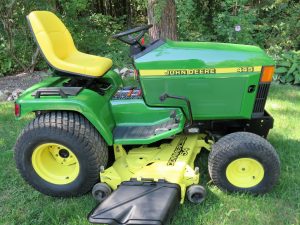 Specs on the John Deere 445

Part of the successful 400 Series of lawn and garden tractors, the John Deere 445 was a step up from the 425. It offered owners a 22HP liquid-cooled V-twin 2-cyl Kawasaki engine with a shaft-driven hydrostatic transmission.

As with the 425 model, the 445 was a 2WD machine with power steering, though buyers could choose four-wheel steering if desired. 48”, 54”, and 60” width hydraulic lift mower decks were available on this model.

Other attachments included the 54” (front-mounted) hydraulic lift blade, a 46” (single-stage) or 47” (dual-stage) snow blower, and the Model 40 loader.

Here’s a link covering the 425 and 445 on Deere.com that you may find useful.

About the John Deere 455

Another member of the John Deere 400 family of lawn tractors, the 455 offered up a Yanmar 22HP 3-cylinder, liquid-cooled OHV diesel engine with a shaft-driven hydrostatic tranny. Like other members of the 400 series, the Deere 455 was a 2WD tractor with power steering (four-wheel steering was offered as an option).

The same 48”, 54” and 60” mower shaft-driven mower decks were also offered on the 455, as was the 54” blade and the 46” and 47” blowers (single- and dual-stage, respectively). Although the Model 40 loader was an available attachment, it was compatible with two-wheel steering models only.

This model isn’t as common as the 425 or 445, but it remains an excellent tractor that stays true to the John Deere legacy of quality lawn tractors. 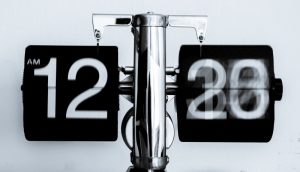 By the time the first of these tractors were produced, people had long said goodbye to the “decade of decadence” as the 1980s is sometimes humorously referred to. The 90s were now in full swing, and in 1993, the first episode of the enormously popular TV show The X-Files aired on September 10th of that year.  Remember the famous tagline from that series?  The truth is out there.

And who can forget Whitney Houston famous hit song, “I Will Always Love You,” or “That’s the Way Love Goes,” by Janet Jackson. If the music wasn’t playing, tv was, and the most popular show in 1993 was 60 Minutes, followed by Home Improvement and Seinfeld.  Cheers aired its season finale while Hollywood super couple Alec Baldwin and Kim Basinger tied the knot.

To view any available tractors we may have in the 425, 445, and 455 series of John Deere garden tractors, click here.