Part of the 400 Series of John Deere lawn and garden tractors, the 420 came onto the scene in 1983. It replaced the earlier John Deere 400 and like its predecessor, was a sales success. With a 20HP Onan 2-cylinder gas engine and 2WD hydrostatic Sundstrand 90 transmission, the John Deere 420 remains a popular tractor, with many loyal owners claiming it’s one of the top garden tractors ever built (sorry, 318 enthusiasts!).

Hydraulic lift mower decks were available in 50” and 60” widths. Some attachments offered for the 420 included a 54” blade, 48” tiller, a 46”2-stage hydraulic lift snow blower, and even a 50” or 60” rear grooming mower. Best of all, the 420 could accommodate the John Deere Model 44 loader such as the setup shown here.

Early in production, John Deere used the Onan B48G engine, which was later replaced by Onan’s P220G engine during the 1987 model year beginning with the serial number 420001. 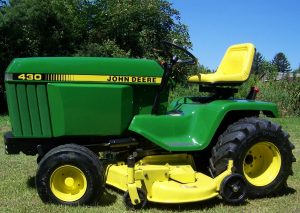 Prior to the release of the 420, the 400 was king on many a lawn. But the introduction of the 420 meant a smoother, quieter ride marked by a transition to the then-new Onan engine and of course, hydrostatic power steering. The following year, in 1984, the beefy diesel 430 came out.

Later on in the history of John Deere lawn and garden tractors, the 425 would be released in the early 1990s, and many owners enjoyed the step up to optional four-wheel steering.

Fun fact: The 420 boasted annunciator lights that were built into the dash panel. It also offered a reserve gas tank which could allow about 15-30 extra minutes of operating time.

As always, if you’re searching for parts for your 420, our two main recommendations are the original manufacturer, John Deere, as well as Onan Parts for engine-related parts. 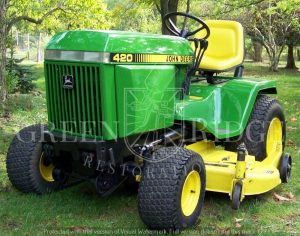 Contact your area farm and garden store or tractor dealer, where they may be able to help you find the parts you need. Alternatively, try searching on eBay or even Craigslist, where the available inventory is frequently changing.

If you need a replacement manual for your 420, search online to see what you can find – you may be able to locate manuals on the web for free. If you can’t find what you’re looking for, you can always try one of the resources listed above.

To read more in-depth info on the John Deere 420 – or any other John Deere model – we highly recommend TractorData.com and the Weekend Freedom Machines Forum. 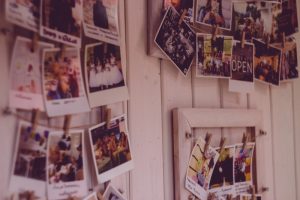 After mowing lawns, with their John Deeres tucked in the garage, their owners relaxed by watching popular tv shows like The A-Team. That fast-paced television series coined the ever-popular phrase, “I love it when a plan comes together.”

If nothing looked interesting on tv, movie theaters were showing huge box office draws like Return of the Jedi, Trading Places, Octopussy and Sudden Impact. Sports fans watched as the New York Islanders won the Stanley Cup and the Washington Redskins defeated the Miami Dolphins 27-17 in Super Bowl IVII.

For those who love trivia tidbits, world heavyweight boxer Jack Jempsey passed away in 1983, as did TV journalist Frank Reynolds.  And founding member and drummer of The Beach Boys, Dennis Wilson – after being homeless a month before his death – drowned at Marina Del Rey.

And as Walter Cronkite said at the close of every news broadcast:  “And that’s the way it is.”