✪If you’re looking for a John Deere 332 for sale, click here to see our latest offering.

If the 316 was the “little brother” to the 318, the 332 can be considered its half brother. Think of it as the diesel version of the gas-powered 318. With a 16HP Yanmar 3-cylinder liquid-cooled diesel engine, the 332 succeeded another diesel model, the 330. 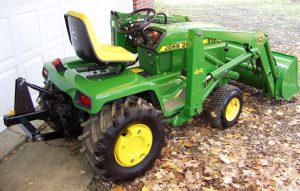 Though it shared the same engine with the older model 330, the 332 rolled out with additional features many owners appreciated, including hydrostatic power steering and dual hydraulics. John Deere produced the 332 at its Horicon, WI plant beginning around 1987 and ceasing production in 1992.

Owners could choose between three hydraulic lift mower decks with cutting widths as follows: 38” (2-blade), 46” (3-blade), or a 50” (also 3-blade). A 54” front-mounted blade with hydraulic lift was also available, as were two snow blowers: a 46” single-stage and a 47” dual-stage, both hydraulic lift.

In our experience restoring John Deere lawn and garden tractors, we don’t come across the 332’s nearly as often as other models like the 318, since fewer people owned them. Like the 318, the 332’s are well-built, solid lawn tractors that live up to the John Deere legacy of quality.

Finding Parts for the JD 332

If you’re trying to source parts for your Deere 332, we recommend the original manufacturer, John Deere. If you’re in search of a hard-to-find part or just trying to be cost-conscious, try searching on eBay or even Craigslist, where the inventory is always-changing.

If you need a replacement manual for your 332, search online to see what you can find – sometimes manuals pop up in Google search results for free. Often you can download a PDF, or at least reference the manual online.

To read more in-depth info on the John Deere 332 – or any other John Deere model – we highly recommend TractorData.com and the Weekend Freedom Machines Forum. 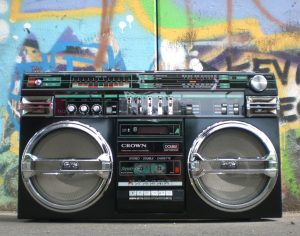 The last John Deere 332 rolled off the assembly line in 1992 – already a quarter century ago. That year, the Washington Redskins were the Superbowl champions, the Pittsburgh Penguins took home the Stanley Cup, and the Chicago Bulls were the NBA champs.

On the fashion scene, Kate Moss was well on her way to becoming the “anti-supermodel” of the 1990s, rocking a “heroin chic” waif-like look that was in stark contrast to the more curvaceous models of the day like Cindy Crawford and Naomi Campbell.

Long before he starred in blockbuster hits like “The Perfect Storm” and “The Italian Job”, Mark “Marky Mark” Walhberg was stripping down to his Calvins and stealing the hearts of women everywhere. Time Magazine’s Man of the Year, however, was none other than now-former US President Bill Clinton.

And finally, Jack Nicholson made this one of the most famous lines in movie history when he starred in “A Few Good Men”…

“You can’t handle the truth!”