✪If you’re looking for a John Deere 322 for sale, click here to see our latest offering.

Many people – even those who aren’t John Deere enthusiasts – are familiar with the 318 lawn and garden tractor. But mention the John Deere 322 – and few people even recall it.

With some sources pointing to an original sticker price of $6,800 back in the day, the Deere 322 was (and remains) a shining example of John Deere’s history of producing quality lawn tractors. 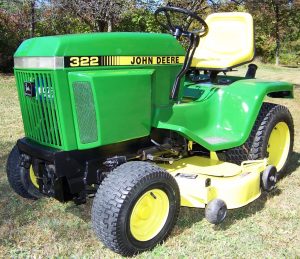 Here at Green Ridge Restorations, we don’t take in nearly as many 322’s as we do 318’s. When people ask us what the difference is between the two, it’s pretty straightforward: 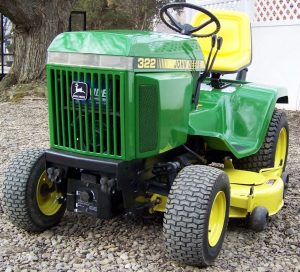 Now that you know the difference between the two, here are some other specs on the John Deere 322:

Looking for parts for your John Deere 322? Your John Deere dealer is your best bet. We recommend using JDParts to look up the parts you need.

Ready to go back…way, way back?

Let’s step back into 1988 when the first John Deere 322 rolled off the assembly line in Horicon, WI.

Remember the California Raisins? Their version of the catchy song “I Heard It Through the Grapevine” hit #84 on the Billboard Hot 100. And if you’re a fan of Broadway you may know that back in January 1988, The Phantom of the Opera opened. 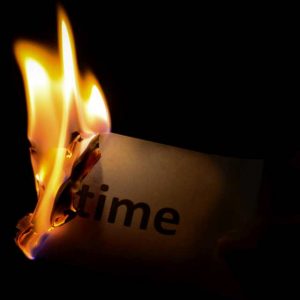 Phil Collins belted out “A Groovy Kind of Love” and Bobby McFerrin was encouraging people everywhere to kick back a little with “Don’t Worry, Be Happy.” George Michael’s “Faith” was topping the charts, followed by “Need You Tonight” by INXS and George Harrison’s “Got My Mind Set on You.”

Who can forget the now-classic “Die Hard”? But it was “Rain Man” that went on to become the highest grossing film of 1988, followed by “Who Framed Roger Rabbit” and “Coming to America.”

Believe it or not, 1988 was a big year in the early history of the Internet. The 1988 Internet worm became the first well-known computer virus. The World Wide Web (WWW) was discussed at the European Organization for Nuclear Research (known as CERN). And, the first permanent intercontinental Internet link was made between the US and Europe.

We certainly have come a long way since then…and we’ll leave you with an amusing quote from Doug Larson, “Home computers are being called upon to perform many new functions, including the consumption of homework formerly eaten by the dog.”